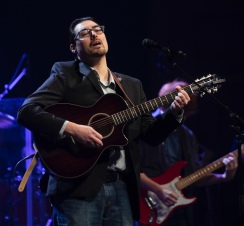 Jason is originally from Tahlequah, OK and came to know Jesus through the witness of his mother and father at the age of 5.  He began taking piano lessons at age 9 (against his will) and two years later was serving as the pianist for his father’s church - New Mission Baptist Church - in rural Oklahoma.  He continued to serve in the church and was involved in choral music throughout junior high and high school and learned to enjoy many different styles of music - classical to country, jazz to pop, traditional and contemporary worship music and others.

In college, at the request of a new Jazz Band Director Will Campbell, former touring saxophonist for Harry Connick Jr., Jason tried out for the Northeastern State Jazz Band and by God’s grace began formal collegiate training.  As a vocal major, he participated in the NSU Chorus, The Entertainers (Vocal Jazz Ensemble), and as a soloist in several formal recitals.  He continued to serve in his local church as a worship team member and leader throughout his college years and came on staff at Grace Baptist Church in 2002.

God began a work that continues to this day of granting him a love for Jesus that must be expressed and shared with others in worship. As a songwriter, Jason has written well over two hundred songs that seek to proclaim the truth of God’s word and guide the response of the worshiper in true worship. He recently had two songs published in the new "Hymns of Grace" Hymnal compiled by Master's Seminary. (Affiliated with John MacArthur)

Jason was on staff at Bethlehem Baptist Church as the Pastor for Worship and Music, South Campus in Minneapolis, MN.  He moved to Louisville, KY where he was pursuing his doctoral degree in Christian Worship. He has also traveled internationally to lead worship, teach, and do Gospel mission work in several countries through the means of music. He has travel internationally as the pianist for The Jason Harms (jazz) Quintet. He is now a member at Sojourn Church in Tulsa, OK where he serves in corporate worship leadership.

As the founder and teaching mentor of Crossworks School of Worship & Music, Jason seeks to use the means of music education to pass on the biblical vision of God’s supremacy over all things, a love for the Savior, Jesus Christ, and a mission to take this message of the Gospel to all the world.

Jason has a beautiful and loving wife, Anjel, and two wonderful boys, Andrew and Isaac.  He loves them all very, very, very much.